Connect with Nature - One Adventure at a Time

Finding Food in the Woods

Before we left on our most recent backpacking adventure on the Appalachian Trail, a friend asked if we ever forage for wild foods. I admitted that I was nervous to do so, afraid of mis-identifying plants and eating something poisonous.

Last fall, we happily enjoyed windfall apples and pawpaws. Mmmm…sweet and juicy. What a treat while hiking! And we hear rumors that early summer offers plenty of opportunity for picking wild strawberries and wild blueberries while walking. 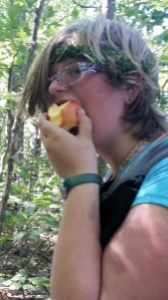 This spring we tried a few delicacies from the woods. Daughter asked why it smelled like home-cooking while hiking one day. I realized we were walking past huge amounts of wild onions. She picked some to try. 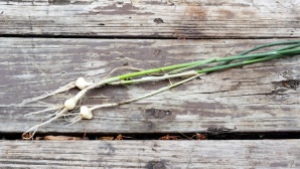 After pulling off the outer layer/leaves, she tore them up and added them to our dehydrated rice meal. They added a lovely bit of spice and we were excited to find them many other nights to add to our dinners. 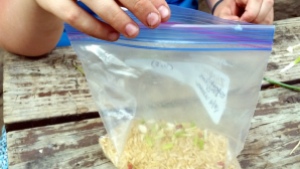 One long hiking day, I was tired of eating trail mix and sweet candies. I really wanted some fresh veggies or fruits to crunch. Then I remembered that violets are edible flowers. And I happened to be surrounded by those wildflowers at that moment. 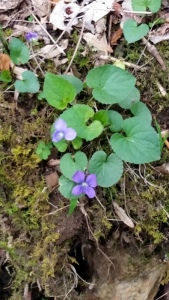 Pick one from each plant and pop a handful into your mouth. Voila! Tiny bits of tangy, moist refreshment! 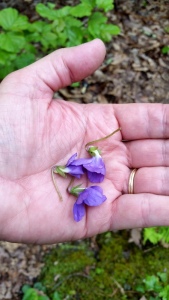 I’m certain it will be a very long time (if ever) before I pick fungi or mushrooms on my own for us to eat. These are the most risky to identify correctly. Another hiker described her family’s tradition of picking morel mushrooms each spring to feast on. She explained where they were most often found and which plants usually grew nearby. I THOUGHT this was a morel mushroom when I saw it, but chose not to risk picking it. Besides, we had no frying pan nor butter to saute it properly! A few hours later another hiker came walking into camp, carrying a few of these same mushrooms to eat for his dinner.

At another shelter, a fellow hiker arrived with a big clump of bright colored, hard shelled fungi. He called it Sulfur Shelf Fungus, sometimes called “Chicken of the Forest” because of its texture.

This hiker was confident of his identification so after he chopped it up, soaked it in boiling water, rinsed it, then cooked it with his pasta, we tasted a tiny bite. It was still a little bitter but the texture was definitely like chicken. (He soaked it longer and rinsed it more times the next day and said it was sweeter.) 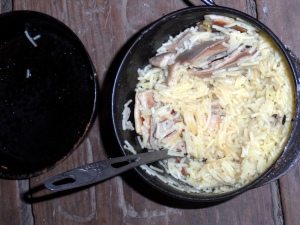 I found more of the fungus the next morning on a nearby stump. I wasn’t interested in carrying it to add to our supper, but hiker-dude was excited to put it in his food bag. 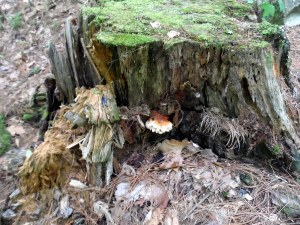 Our usual hiking-food gets boring after eating the same thing for weeks at a time. It was certainly nice finding extra flavor to add occasionally to our meals.  I think we will do some research this summer and see what other things we can add to our hiker-pantry on our next backpacking trip.

NOTE: when picking wild foods, please remember to only take a small amount from any given plant. That way there is plenty left for other humans and for wildlife! This limited foraging also allows the plants to thrive and produce more food throughout the remaining season.

(Contact me if you would like daughter and I to make a presentation to your Ohio group about backpacking foods or any other aspect of our adventures in the woods!)

Walk in the Woods?

This site uses Akismet to reduce spam. Learn how your comment data is processed.

Theme by Anders Noren — Up ↑