Connect with Nature - One Adventure at a Time

More Adventures for the Tiny-Mes

It’s all well and good to have (tiny) hiking pals who are remarkable similar to each of us. They love being in the woods, they crave adventure, they enjoy meeting new people, and they thrive on trying new things. But…sometimes similarities can cause problems. Tiny A and Tiny S are also outspoken, persistent, and strong-willed, just like us. (Some might even say sassy, stubborn and rebellious!) On this trip, they occasionally got bored with hiking day after day and wanted to go off on their own to explore new possibilities.

The first sign of trouble was when we reached the Eastern Continental Divide along the Appalachian Trail on the top of a mountain in SW Virginia. Tiny A has always wanted to learn Spanish and insisted she was going to take a boat down the streams and rivers, cross the Gulf of Mexico, and head for the Yucatan. Tiny S wanted to spend time at the beach and decided to follow the waterways until she reached the Atlantic Ocean. We told them it would be too difficult to build a boat up on a mountaintop. They gave in but sulked the rest of the day…

A few weeks later, Tiny A and Tiny S decided to prove us wrong. They found a lovely stream and jumped aboard a leaf-boat while Story Seeker was getting water. I caught them just in time, before they were swept away from shore into the swirling current.

At one point, the Tiny-Mes decided they wanted a break from a forest filled with tree after tree, all looking the same. They were tired of the drought and resulting severe lack of drinking water. They were grumpy about the noise and the dangerous footing caused by so many dead leaves on the ground. Tiny A and Tiny S found an area of luxurious leafy plants, sat down and refused to move unless we promised to take them to a jungle. Sorry, Tiny-Mes! Perhaps that’s a trip for another year!

Eventually, the Tiny-Mes tried a new tactic—appealing to our interests outside of backpacking. Knowing how much Story Seeker finds peace when walking through deep caves, Tiny A and Tiny S found some caverns to explore among the tree roots along the Appalachian Trail. We had to remind them that size differences prohibited us from joining them for their hours of spelunking. (They supposedly found wondrous stalactites and stalagmites…but we will all just have to take their word for it! Maybe next time they will take a camera with them!) 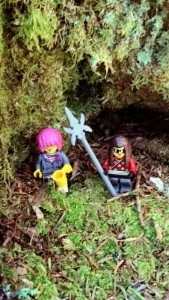 Tiny A watched Andowen making fantasy weapons out of wood. One afternoon when we got to camp, we discovered Tiny A taking sword-play lessons from a local elf. She claimed that when she got as good as Andowen, they could get off trail and spend time at a Renaissance Fair. Andowen loved that idea…but I meanly insisted we had to finish our current adventure before going somewhere else. 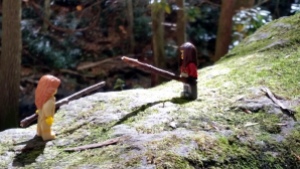 Next, Tiny A and Tiny S tried to convince Andowen to join them on a fishing expedition. They had forgotten that she had no proper gear to catch a fish, so she was able to avoid getting caught in that particular fantasy. She has wondered if we could bring some hooks and fishing line on our next trip. Tiny A is certain it would be an excellent alternate use for Andowen’s sturdy staff! 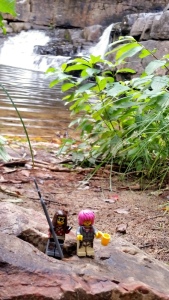 We thought we had finally convinced the Tiny-Mes that this trip was all about backpacking. They seemed to regain pleasure in our trek. But one day, the Tiny-Mes disappeared again. After some backtracking, we found them in a rocky area. They were enjoying some climbing and rappelling. When we asked them why they ran off without telling us, they reminded us that unlike them, we are both afraid of heights. True! We had absolutely no interest in joining them for that type of adventure! 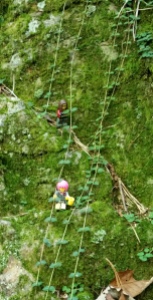 Eventually, the Tiny-Mes quit arguing and disappearing on a search for new adventures. They claimed they would stay with us and hike without complaints. After I bribed them with the promise of publicity, they agreed to let us know next time they found an exciting distraction. That’s why I took these photos and am publishing their exploits on my blog!

(Read more stories about our Tiny-mes and their adventures HERE.)

Alone in the Woods?

This site uses Akismet to reduce spam. Learn how your comment data is processed.

Theme by Anders Noren — Up ↑